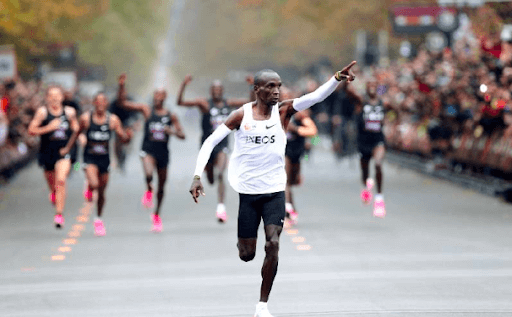 You probably already knew what was going to be our main topic in this newsletter, right? It would be impossible not to mention the 1:59 Challenge (about which we’ve been sharing videos for a while now in this newsletter) that finished with the final result of breaking two hours in the marathon…with Eliud Kipchoge crossing the finish line in Vienna in 1:59:40. Mind-blowing.

You may have your own opinion about this type of “manufactured” events for trying to chase a record, and that’s totally ok–but at the same time, it would be impossible not to be happy for the sport in general and the outcome of this year-long project of one of the most prolific runners of the last years in the marathon distance: Kipchoge. Definitely a guy that deserves all the love he’s been getting after this massive effort.

You can watch the whole thing here, and also read about it here.

I bet NOBODY would have guessed that on the same weekend that the two hour record in the marathon would be broken, that another one of the most untouchable records of the sport would also fall. That’s exactly what happened this weekend at the Chicago Marathon where Brigid Kosgei managed to break the women’s marathon record after crossing the finish line in 2:14:04. A record which stood for more than 15 years just got crushed by this young lady, who can now say she’s run it the fastest in history. Incredible performance for sure.

You can read about it here.

The Skyrunning year is coming to a close, and the season finale is set to happen this week around the amazing trails and peaks of the wonderful “Lago di Garda” in Italy. This short but sharp course always delivers great competition, and this year more than ever, as all the best Skyrunners of the year fight for their final points to finish up their race for the podium.

You can read about the race here.

If you’re into following the 100 mile scene in the States, you’ve probably heard Amanda Basham’s name. She’s been running Ultras for a while now, and has had really good performance at races like the Western States 100. But this year, she had an amazing performance at one of the races of the UTMB festival: the CCC, which put her into the international spotlight. We leave you with this interview during which you can get to know her better.

You can her the interview here.

With all the news related to running and marathons in this newsletter, we decided to put some more hardcore stuff here to close…the release of this video about the first ski descent of the fourth biggest peak of the world: Lhotse. We leave you with this beautiful video about the story behind this epic adventure of Hilaree Nelson and Jim Morrison.