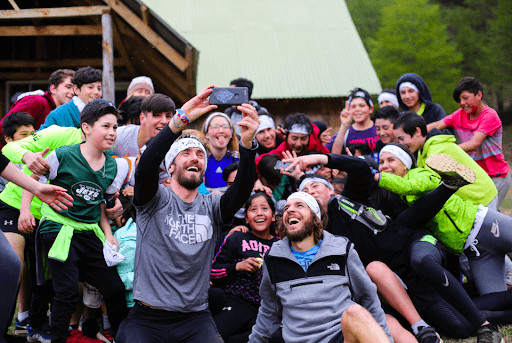 We’re really happy to share that last week, we had our first “Vert Academy” event, taking more than 60 kids from the town of Cochrane in the middle of the Chilean Patagonia out for their first trail run.

Their enthusiasm for the mountains and energy to run the loop blew us away: the kids and young adults, whose ages ranged from 8 to 19, ran a 6 mile loop with 2,000 feet of vert. The run took place in the Reserva Nacional Tamango, and gave the kids a morning full of exposure to trail running and learning about respecting and enjoying the mountains around them.

A big thanks to all of the kids who got to enjoy an awesome day in their backyard learning about trail running and our two friends and The North Face athletes, Hillary Allen and Patrick O’Leary who helped make this happen.

We leave you with this video that recaps the activity. We’re really looking forward to doing this again in the near future and spreading the word about our sport to younger generations.

Have you heard Dave Mackey’s story? For years, Dave was one of the strongest and most consistent runners on the ultra scene in the U.S. who won pretty much everything he ran.  In 2015, while he was still performing strong as a seasoned ultra runner, he had a terrible accident running down of one of his favorite mountains. In the accident, he sustained severe injuries to his left leg, which left him having to make the tough decision to have his leg amputated in order to keep living the life he wanted.  Did all of this stop him from continuing to get outside? Hell no. We invite you to read his story.

Magda has already had an amazing 2019 season in terms of her trail running results. And as the cherry on top, she decided to give the Tahoe Rim Trail FKT a go. It’s one of the most iconic FKTs in the States, and also happens to be one of Magda’s favorite places to train for her races.  In the end, Magda didn’t set a new FKT (she fell a bit short of Krissy Moehl’s (record) but as Magda said herself, it was an amazing experience which made for an amazing finish for her season. We leave you with this recap (and some photos) of her adventure.

You can read about the adventure here.

What do you think about running a 4 mile loop every hour, until you can’t (or won’t) run it anymore? Well, that’s exactly what the “Big Dog Backyard Ultra” is all about. The man behind this race is none other than Lazarus Lake, the race director of the infamous Barkley Marathon. This year’s winner was Maggie Guterl, who completed 60 loops…which means 250 miles! You can read a recap of the race via Twitter here, and we leave you with this article with more details about this race which is becoming  more notorious every year.

We feel the same as Trail Runner Mag, who’s  fascinated by these vintage videos of Skyrunning races. Short-shorts, bottle tucked into funny packs (soft flasks were definitely not a thing) going up and down mountains on trails that are more technical that most of the ones we find in modern races. The Aspen Sky Marathon of 99 has all of that. We leave you with the video.